Srebarna Lake is the only preserved Danubian lake in Bulgaria. Its name (translated “Silver”) has always been associated with wealth and variety of birds. Over the years, this unique wetland has gone through many transformations and changes – from disruption of life-giving link with the river resulting in almost complete drying of the lake in the mid- 90s of the 20th century, to wildlife revival after re-connecting the lake to the river.

Today the lake is again a paradise for rare waterfowl, such as the Dalmatian Pelican and the Pygmy Cormorant. Srebarna offers a rich mosaic of open water, floating reed islands, pools overgrown with water lilies and the silent shadow of willows, half submerged in the lake waters.

In the northern part of the lake reedbeds gradually give way to dense vegetation, which surrounds the valley of the Danube and Komluka island. These conditions create a variety of habitats that shelter its numerous inhabitants .

Because of the richness of its bird fauna, Srebarna has long ago received international recognition – the site has been declared a biosphere reserve and included in the list of UNESCO as a World Natural Heritage Site. The lake is primarily important as a breeding site for colonial waterbirds. It hosts the only colony of the globally threatened Dalmatian Pelican in Bulgaria and this bird has become emblematic of the reserve. The lake is home to other rare and endangered birds, such as the Pygmy Cormorant, Ferruginous Duck, White-tailed Eagle, Red- necked Grebe and Black-necked Grebe, Great Egret, etc. In winter, numerous flocks of migratory birds stop there for roosting or wintering. These include the Red-breasted Goose, Lesser White-fronted Goose, Greater White-fronted Goose, various ducks, etc.

Srebarna is largely influenced by activities related to drainage and the hydrological regime of the Danube. Periodical drying of lake sections and the large fluctuations in water level lead to a progressive overgrowth of open water areas and loss of foraging habitats for some species. Illegal fishing with nets is causing disturbance to birds and entanglement of diving birds in nets. The management plan for the reserve needs to be updated. 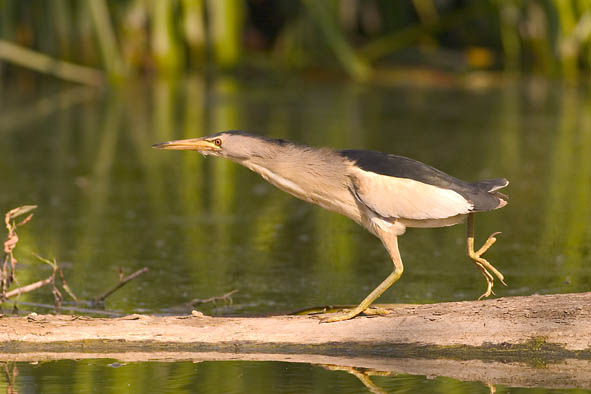