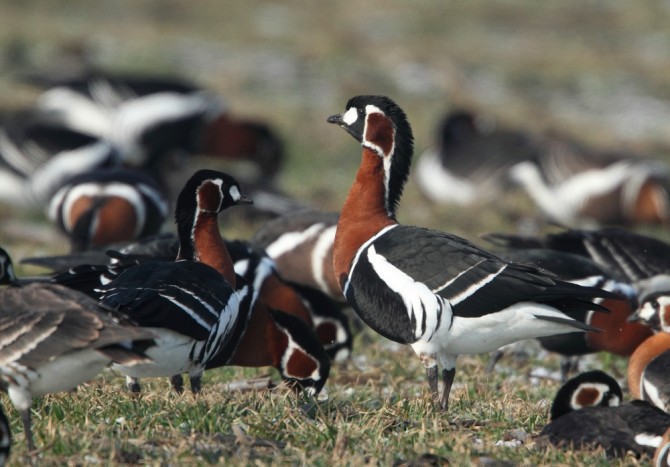 The Red-breasted Goose is the smallest and one of the most beautiful geese, due to its striking colours – chestnut-red neck, breast and cheek patch, separated from black upper and underparts with conspicuous white lines.

Breeding: The species breeds on the Taimyr, Gydan and Yamal peninsulas, in the Russian tundra. It nests in loose groups, where breeding success may depend on nesting Peregrine Falcon (Falco peregrinus) and Snowy Owl (Bubo scandiaca) providing protection from terrestrial predators. Successful breeding seasons are also associated with good lemming years, when predators are sated by the lemming population and therefore predation of geese is much lower.

During the autumn migration the majority of the population, travel on to the western Black Sea coast, principally in the Dobrudzha region of Romania and Bulgaria, but increasingly in the Ukraine and even Southern Russia during mild winters. They arrive in small flocks in November-December, while larger numbers are recorded later in the winter, depending on the weather conditions. A few may continue south to the Aral Sea, while the majority travel south-west towards the Caspian. Small flocks may remain to winter on the Caspian Sea coast in Azerbaijan while others may visit Greece and occasionally very small numbers reach Hungary, Turkey, Iraq and Iran. The Red-breasted Geese are usually mixed with greater white-fronted geese (Anser albifrons) flocks.

Although three or four key staging areas are known, there are probably several undiscovered sites along the flyway.

Wintering grounds: On the main wintering sites in Romania and Bulgaria the geese now feed on agricultural land dominated by winter wheat and barley, maize stubble, some pasture grasses, rape and spilled grain. The birds periodically fly to coastal lakes to drink. These lakes, situated up to 50 km from the feeding areas, are also used as night-roosts. The proximity of drinking and roosting sites to feeding areas may influence winter distribution. In Bulgaria, Red-breasted Geese roost on water; usually in the middle of lakes, but occasionally, or in times of high hunting pressure and calm conditions, on the sea. When the lakes freeze they roost on the ice.

According to the most recent estimates (AEWA Kazakhstan expedition, 2017), the species population size is estimated at about 50 000 birds.  The maximum count in the winter of 2017 – 23 780 Red-breasted Geese at the lakes of Shabla and Durankulak, indicates that almost half the species global population is wintering in the area.